In the spring of 1930, the Light Board considered placing lines and equipment underground in the business district. However, the $10,000 cost was considered too high, so the idea was rejected. On November 3, 1930, the Power House was retired as the Boston Edison Company was now supplying wholesale electricity to the town at a favorable price from their station on Main Street. As the Light Plant progressed, not all news was positive. Tragedy struck on July 28, 1930 when Arthur C. Anderson became the first and only Concord Municipal Light Plant (CMLP) worker to be electrocuted in the line of duty.

The Great Depression focused attention on finances, and all employees received a five percent pay cut in March 1933. But after hearing the President's message on the National Industrial Recovery Act five months later, the Light Board voted to restore the wage cut and reduce the work week to 40 hours.

Before it was shut down, the Light Plant's store had been an official Maytag franchise, and had offered three-year interest-free payment plans on electric appliances such as refrigerators, ranges and water heaters. On March 7, 1935, Light Board Chairman Richard B. McSweeney sent a letter to the State House recommending that Concord's representative vote against proposed legislation requiring utilities to furnish free "lamp bulbs."

A Supreme Court ruling against CMLP prohibiting municipal utilities from selling appliances put the appliance store operating at the front of the office at 12 Main Street out of business in 1937. The appliance business had been so successful that area businesses claimed unfair competition. As a goodwill gesture, the Light Board invited local appliance dealers to display their products at the location, rent free.

The Light Plant had also offered free cooking classes in the 1930s to promote modern electric kitchen appliances. The instructors included Mrs. Mabel Neal, who held classes on Thursday afternoons at the Girl Scout building on Walden Street, and a Mrs. Lawrence, who held classes at the Town evening school. 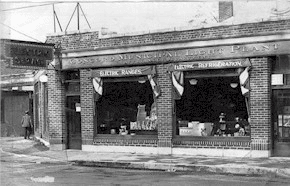 Concord was hard hit by the hurricane of 1938, and the Light Plant received many grateful letters of thanks from local residents and businesses for their work to restore power in the face of tremendous obstacles. Emerson Hospital passed a resolution praising the work of CMLP during the storm, which carried winds in excess of 125 miles per hour. The hospital's resolution noted that its power was restored "within one hour from the time Mr. Pierce felt it safe to send out his workers" by establishing a special line to the hospital from the Edison substation.
Home
Contact Us
Notify Me®
Minutes & agendas
Report an Issue
Bids &
Proposals
Minuteman Media Network
Online Payments
Job Opportunities
GIS & Maps
Important Documents
Volunteer
[]