John O’Neil, a 21-year employee, was named Concord Municipal Light Plant (CMLP) superintendent in 1970 when Russell Eldridge retired. Growth had begun to slow down a bit, and as a result the Plant’s cash position suffered. The Light Board abolished its practice of installing up to two poles on private property at no charge, and looked carefully at other ways to reduce its costs.

Professional rate engineers were hired to review the rate structure, which led to a 20 percent across-the-board increase in 1971. After years of almost continual expansion, the capacity of the distribution system was judged adequate for at least four or five years.

At the end of 1971, the issue of energy conservation was first discussed at a Light Board meeting. Board meeting minutes state that "a major factor in environmental pollution is the electric generating stations as they are known today. Does the Town of Concord wish to continue adding to this burden on society by increased demands for electrical energy on our supplier?

This question, affecting the future of all mankind, is clearly beyond determination by this Board. It is within the realm of possibility, that the Town of Concord, acting in concert, might give direction to regional and national authorities in the final answer to this question of utmost importance." Boston Edison’s proposed power cost increase of 34 percent was cause for concern in 1972, when the Light Plant sought Federal intervention. The next year, Edison’s $480,000 increase forced another general rate increase. A Federal Power Commission ruling on the rate hikes resulted in $289,000 settlement to the Light Plant in 1975.

Boston Edison continued imposing numerous wholesale rate increases during the 1970s. Most increases were "pancaked" on top of each other, resulting in increases on top of increases. This put Concord into a price squeeze since the wholesale prices charged by Edison were greater than their existing retail rates. In response, CMLP filed an anti-trust case against Edison, which was settled in 1980.

The Light Board voted on January 27, 1976 to accept Boston Edison’s offer to purchase their substation on Main Street, known as Station #223, for $500,000. Internal changes were also happening in the 1970s to keep pace with changing times. In 1973, the Town approved the construction of a new garage and office building, and the Light Plant moved to 135 Keyes Road in 1975. Previously, the Light Plant management and staff had occupied about half of the upstairs of the Department of Public Works building. In 1977, the Light Board’s membership was increased from three to five members. 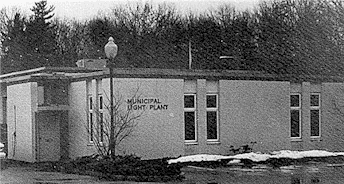