Purple Loosestrife is from Eurasia and was introduced to the northeastern U.S. and Canada in the 1800s, for ornamental and medicinal uses.


A wetland perennial purple loosestrife can grow from 1.5 feet tall to 10 feet high. The stem of the plant is square and is usually quite hairy. The leaves are opposite or arranged in whorls of three. The purple flowers in whorled clusters bloom from July to September. Purple loosestrife spreads prolifically in open, disturbed sites with moist soil or even in shallow standing fresh water. It also invades undisturbed wetland ecosystems. It is tolerant to a variety of soils and pH's and nutrient condition but prefers slightly acidic or neutral soils. 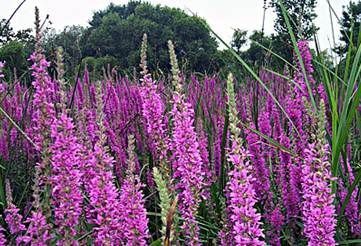 Purple loosestrife has an extended flowering season, generally from June to September, which allows vast quantities of seed to be produced. It is estimated that one plant can produce 2 to 3 million seeds per plant per year. The flowers require pollination by insects, for which it supplies an abundant source of nectar. A mature plant may have as many as 30 to 50 flowering stems from one root stock. It also reproduces vegetatively by root stock that expands at about 1 foot per year.

When Purple loosestrife is introduced to a site, it out competes and replaces native grasses, cattails, sedges, and other flowering plants that provide a higher quality source of nutrition for wildlife. The highly invasive nature of purple loosestrife allows it to form dense, homogeneous stands that restrict native wetland plant species, including some endangered orchids, as well as reduce habitat for wildlife by eliminating natural foods and cover.


As of 1997, 3 insect species from Europe have been approved by the U.S. Department of Agriculture for use as biological control agents. These plant-eating insects include a root-mining weevil (Hylobius transversovittatus), and 2 leaf-feeding beetles (Galerucella calmariensis and Galerucella pusilla). For small infestations, hand pulling can be effective. Foliar spray is not recommended as it can be harmful to the surrounding floura and fauna. View the Invasive Removal page for how to carry out these methods. Any removal within 100 feet of wetland resource areas, including certified vernal pools, or within 200 feet of a perennial stream may require approval from the Concord Natural Resources Commission. Please contact the Division of Natural Resources before you begin.


The following native plants can serve as a good replacement to purple loosestrife in a garden: 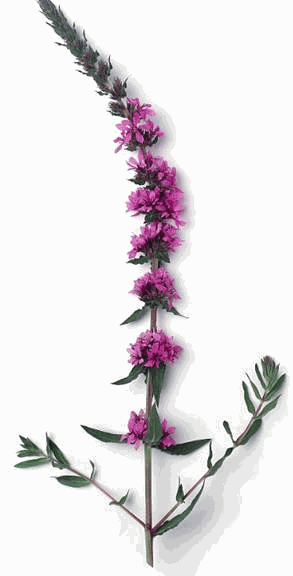